There are 3 types of elasticity in demand that are-

Ricardo confined the use of economic rent to the price paid for the use of land only. The land is free gift of nature & the supply of land is absolutely inelastic. That is why supply of land does not depend upon  the rent or price of the land. The payment made by the tenant to the landlord is not the economic rent as per the Ricardo theory of Rent. A part of payment consist of interest on capital invested in the land by the owner. The total payment done by the tenant to the landlord is known as contractual payment whereas the part of payment that is made for the use of land only is called economic rent.

The portion of the earth which is paid to the landlord for the use of original & indestructible power of the soil is the rent for the land according to Ricardo theory of rent. When the return on the capital investment is deducted from the contractual rent, what is left is pure land rent.

The Ricardo theory of rent based on certain assumptions that are: 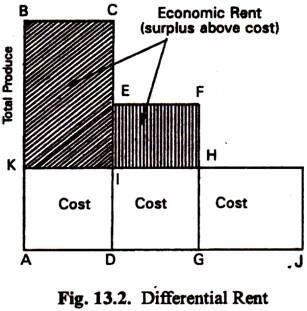 The rent of land is based on the fertility & productivity of land. If land A is more fertile than land B than rent for land A is higher than rent for land B. when population increases, demand for food increases and demand of cultivation marginal land increases as production from original land does not satisfy the food demand of the population. In that case less fertile land also cultivated in order to produce more food for consumption for the population.

The Ricardo theory of rent criticize on the ground of assuming that there is original & indestructible power of land as fertility of the land can be created thorough conservation, based on the sole idea of difference in fertility of land, assumes inelastic supply from the perspective of whole economy where as on the individual level the supply of land is elastic. These are some criticism of Ricardo’s theory of rent.

Popular posts from this blog

May 23, 2021
Description (1) Where an assessee, sets up an undertaking or enterprise for manufacture or production of any article or thing, on or after the 1st day of April, 2015 in any backward area notified by the Central Government in this behalf, in the State of Andhra Pradesh or in the State of Bihar or in the State of Telangana or in the State of West Bengal, and acquires and installs any new asset for the purposes of the said undertaking or enterprise during the period beginning on the 1st day of April, 2015 and ending before the 1st day of April, 2020 in the said backward area, then, there shall be allowed a deduction of a sum equal to fifteen per cent of the actual cost of such new asset for the assessment year relevant to the previous year in which such new asset is installed. (2) If any new asset acquired and installed by the assessee is sold or otherwise transferred, except in connection with the amalgamation or demerger or re-organisation of business referred to in clause (xiii)or cla
17 comments
Read more

July 21, 2020
Description A 60 minute phone call with an expert Marriage\Relationship Counselor to discuss your marriage\relationship related issues. Counselling aims to resolve issues and improve communication in a relationship. Couples’ counselling works with both people in the relationship, however sessions can start with one individual, working towards the involvement of the other partner. What's Included a) 60 minute phone call with the counselor where you can discuss all your issues and seek guidance. What's Not Included a) Counselling session via meeting
6 comments
Read more

March 05, 2021
India being a secular country derives a large part of its laws from various religious practices. One such area of law is Divorce law of India. A divorce case in India can be initiated by either party based on the procedure relevant as per the law applicable to the parties. However, the procedure for divorce always starts with sending a legal notice.   Either party can send a legal notice to the other spouse intimating his/her intent to initiate legal proceedings for divorce. Sending a legal notice acts as a formal way of communication by one party to the other acting as a warning and at the same time creating chances for a last attempt for conciliation, if possible. Connect with an expert lawyer for your legal issue   What is a legal notice for divorce? A legal notice refers to a formal communication to a person or the opposite party in a case, informing him/her about one’s intention to undertake legal proceedings against him/her. Therefore, a legal notice for divorce is a formal inti
5 comments
Read more